I’ve been at various livery yards, some good, some bad, none perfect. Many people enjoy the whole livery experience. You can get advice whenever you need it for free and there’s often a real social element too. Some of my best friends are people who I’ve met on yards and stayed in touch with. This is my guide to being on a livery yard – what types of livery you can get and the sort of people and issues commonly encountered. 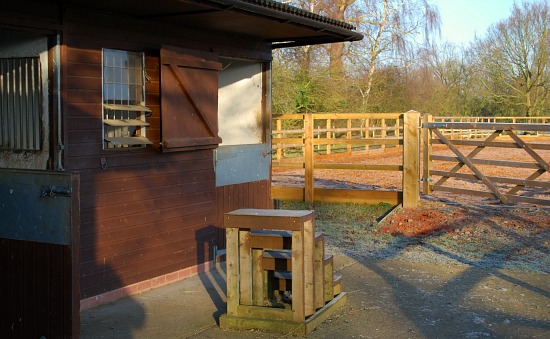 DIY – you do everything yourself. You turn out, your bring in, you feed, you muck out in essence you look after everything to do with your horse. Some yards offer additional extras – usually at a price though. I’ve always preferred to do everything myself, but others who were working, had the cash, or simply didn’t want to get up would pay yards extra to turn their animals out, feed etc.

Part Livery – Pretty much the same as DIY but the yard will usually turn out or bring in for you and feed at the start or the end of the day.

Working Livery – Strangely a bit pricier then Part Livery on a whole. The stable staff look after your horse for you but they also get to use it whenever they want for riding lessons. Great if you don’t mind anyone sitting on your pony, but not so great should you turn up to ride it yourself and it’s already being used or just plain shattered.

Full Livery – they look after your horse, muck it out, feed it, groom it – everything. Usually if you wish your horse to be exercised it’s more money, but it does mean if you so chose you would never have to see it, just keep paying the bills. You laugh, but you’d be surprised how many yards I’ve been on where people have had one if not two horses and not seen them for months on end.

Competition and sales livery – usually the same as full but with the additional expense of someone riding your horse, showing your horse and competing it.

What could I say…. The good, the bad and the ugly.  Some places are run really professionally, but many are sadly not. You can get big yards where the liveries are at the bottom of the pecking order. You’re there week in week out to pay the bills, but woe betide you ever think you can use the school when there are riding lessons on (which is all the time) or can ask a question about turn out! There are also yards which have been run by non horsey people – ex farmers diversifying. They may mean well, but some seem to think that you should treat your horse like a cow. Some livery owners get greedy as well – they build and build and build more stables to get more cash and end up unhappy horses unable to go out because of a lack of turn out and a poorly maintained ménage. That said I’ve been on a livery yard which was friendly, very well maintained, professionally run and intentionally small.

The mother – who bought her kid a pony and now looks after it because the child’s no longer interested, has grown up and away or simply likes the fact their mum does all the work and mum hasn’t figured out she’s being taken for a muppet yet.

The yard bitch – The person who makes more noise than anyone else, is the best rider in the world in their opinion and makes you feel paranoid that you’re unable to even hang a hay net up correctly.

The person you would like to be – The rider who you admire and secretly hope to beat in a competition one day, who looks so in tune with their abilities and horse that it makes you green with envy.

The status snob – The person with all the new kit, no expense spared and who talks the talk but doesn’t walk the walk. It’s amazing how much they’ve done in their life and how good they are at riding but you’ve never seen them so much as sit on their horse and you can’t remember the last time they even picked its feet out.

The quiet one in a corner – who just wants to try and do the best by their horse and is there should anyone want help, but other than that sticks their nose out and just concentrates of their life.